In November 2017, we announced the formation of a Task Force to address a number of governance issues at Hypatia. The Co-Chairs, as stated then, are Sally Haslanger (MIT), Serene Khader (Brooklyn/CUNY), and Yannik Thiem (Villanova). We are very pleased now to announce the appointment of the additional Task Force Members: 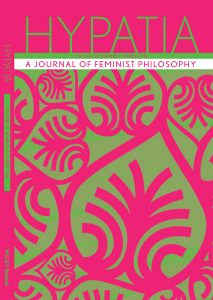 The board would like to thank all the Task Force members for agreeing to take on the important and challenging work that lies ahead for Hypatia.

We are also pleased to announce that Kim Hall (Appalachian State) has agreed to chair the Search Committee for the next editorial team of Hypatia. We are very grateful to Kim for her willingness to take on this crucial task. Inquiries about the search should be directed to Kim at hallki@appstate.edu. Please circulate widely the Call of Nominations for a new editorial team. Other Search Committee members are: Ann Garry (Cal State Los Angeles), Desirée Melton (Notre Dame of Maryland), and Paula Moya (Stanford).

As the Task Force undertakes the work of restructuring, the Hypatia Non-Profit Board of Directors believes that now is the right time for its members—Elizabeth Anderson (Michigan), Leslie Francis (Utah), Heidi Grasswick (Middlebury), Miriam Solomon (Temple), and Lisa Tessman (Binghamton)—to step aside and let others guide Hypatia through this very important transitional phase.

We are very pleased to announce that Linda Martín Alcoff (CUNY), Talia Mae Bettcher (Cal State Los Angeles), Helen Longino (Stanford), Jacqueline Scott (Loyola), and Nancy Tuana (Penn State) have agreed to serve on the new Board of Directors, effective February 18th 2018. Ann Garry (Cal State Los Angeles), representing the interim editorial team, will continue to serve on the board as an ex officio board member for the duration of her term as Interim Editor. We are deeply grateful to Linda, Talia, Helen, Jacqueline, Nancy, and Ann for their commitment to Hypatia and their willingness to serve Hypatia in this capacity.

We would also like to thank Ann Garry, Serene Khader, and Alison Stone who have taken on the interim editorship of Hypatia and will continue in this role until July 2018.

Throughout its history, Hypatia has been built through the labor and commitment of those who care deeply about the development of feminist philosophy and the broader feminist community. We are very grateful to all who have worked so very hard for so many years to make Hypatia the highly respected journal that it is today, and to those who have continually called upon it to embrace and embody not only values of scholarly integrity, but also core feminist values. And we are thankful to those who have stepped forward to continue that mission.

Skip back to main navigation

The editors of Hypatia are pleased to announce the election of our new Board of Associate Editors! After much deliberation and an incredible outpouring of support and enthusiasm from the Hypatia community, we are excited to be joined by our…
END_OF_DOCUMENT_TOKEN_TO_BE_REPLACED

Call for Nominations for Associate Editors

Hypatia has completed a transition to a new Editorial Team (See the Editorial Team’s statement, “The Promise of Feminist Philosophy,” Hypatia vol. 34, no. 3 (Summer 2019); also see ‘New Editorial Team Chosen for Hypatia’, the revision of its governance…
END_OF_DOCUMENT_TOKEN_TO_BE_REPLACED

As Hypatia finalizes its new governance structure, we regret to announce that we will be postponing the Hypatia Diversity Grants until 2020. This includes individual as well as project grants. In the meantime, we invite you to plan and prepare…
END_OF_DOCUMENT_TOKEN_TO_BE_REPLACED

The Editors’ Annual Report 2018 covers an overview of editorial activities, reports on submission and review activities, distribution highlights, and special initiatives. Although the 2018 annual report would typically not be written until all the data from Wiley and from…
END_OF_DOCUMENT_TOKEN_TO_BE_REPLACED

Hypatia’s Individual Diversity Grant competition for January 1, 2019 will be postponed until the June 1, 2019 deadline because of the transition between editorial teams. In June we welcome applications for Diversity Project Grants as well as for Individual Grants.
END_OF_DOCUMENT_TOKEN_TO_BE_REPLACED